Traditional food in India differs from state to state. The state of Rajasthan also has its authentic cuisine too. The shortage of water does not allow too much vegetables to grow in this area. However the high cattle rearing over the years has resulted in a variety of food which is rich in milk, ghee, curd and buttermilk. Pulses, lentils and legumes that are grown locally are used extensively in meals. Most of the Rajasthani cuisine can be preserved for a long while owing to the absence of ready fuel at all times. Legendary stories about royal feasts are heard where hundred or more dishes were prepared and served during in gold and silver utensils.

Keeping the tradition alive there are plenty of good eating joints in Kota which serve a variety of cuisines. Starting from authentic Rajasthani to continental you get variety of mouth watering dishes that you desire for in this historical city. 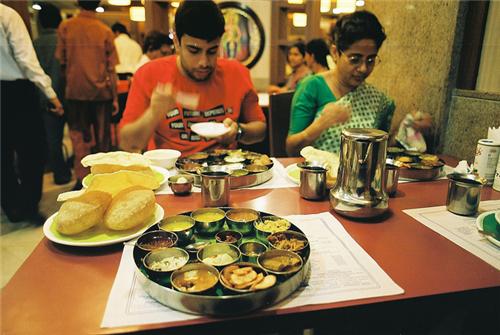 Variety in the Cuisine of Kota

The old princely state of Rajasthan also has its unique line of royal cuisines. The rulers who went on hunting expeditions liked the preparations of the meat or the fowl which they hunted. Till date, Rajasthani princely family feasts flaunt meat cuisines that are unrivaled.

Another peculiarity of Rajasthani meals is that sweet dishes are never served after meals, unlike desserts they are always had at the beginning of the meals. At times they are served before, during and after the meal.

There are many people in Rajasthan who are strictly vegetarians. Most of the times pure ghee is used for preparing food which adds flavour and aroma to the dish. Some of the tastiest curries of Rajasthan are based on pulses or gram flour. Also there is good use of yogurt, dry fruits and spices in many of the delicacies. Rajasthan also boasts of a wide array of savories and sun-dried snacks.